Two summers ago, my mother and father made a trip to my great grandmother’s house in Republic, PA, which my grandmother now owns. Republic is a very, very, very small coal-mining town in southwest PA. My great grandfather built the house for the family after immigrating from Italy. My great grandparents had an amazing garden, raised chickens, had a bootlegging business in the basement and owned a little restaurant called Cozy Nook!
The garden is probably where my mother get’s her fondness for straight out of the garden tomatoes, still warm from the sun. 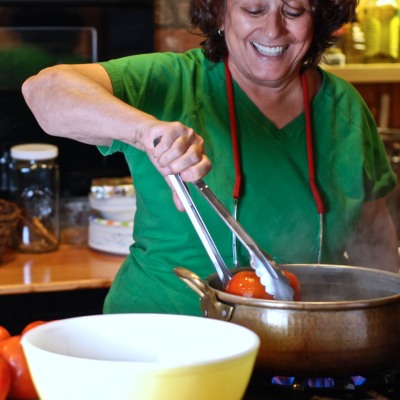 Getting back to my parents detour…instead of coming home through Amish country, which they usually do, they decided to head to my great aunt’s house in Buffalo.  While they were driving back from Buffalo to Cambridge they discovered a farm in upstate New York. It was tomato heaven. They filled their Suburban to the brim and headed home with three bushels of the most amazing tomatoes. We canned for three days! My daughter Rose, who at the time was three, helped. (hmmm 3,3,3?)


I really didn’t want to do a post on tomatoes because every food blog in creation is posting on tomatoes! I changed my mind the other day when our 83 year old neighbor, Sammy, stole a bunch of tomatoes from someone’s garden in the neighborhood and brought them over! Along with a few peaches from a yard down the street. Sssshhhh!

Every time we pull out one of the jars full of our upstate NY tomatoes and turn it into something spectacular someone always says, “You can your own tomatoes? I have always wanted to learn to can.”

It’s not so hard!
We never put any seasonings in our tomatoes. Not even a basil leaf! We like to save the seasonings for whatever we are making with the tomatoes. We have made it a yearly tradition. So here it is…our very simple way to put up some fresh August tomatoes so that in the middle of February we can taste a little summer! 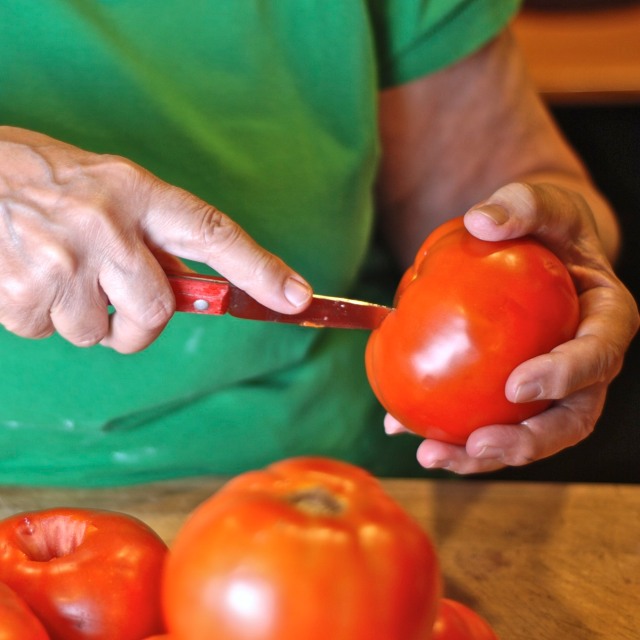 1. Cut core out of center of tomatoes

2. Place in boiling water until skin begins to crack

3. Place in ice water bath to cool so that you can peel skin off of tomatoes without burning fingers-as well as shock tomatoes which helps them peel easily

5. Cook the tomatoes down over medium low heat for two hours or until they are the desired thickness. We do not like ours watery but at the same time we don’t like them super thick. The time also depends on the moisture in the tomato.
We DO NOT seed our tomatoes! If you would like to take the seeds out you can you a food mill or sieve.
6. Make sure not to over fill the jar (follow the manufacturer instructions that come inside the Ball box). Clean rim with a clean towel and put lid and ring on jar. 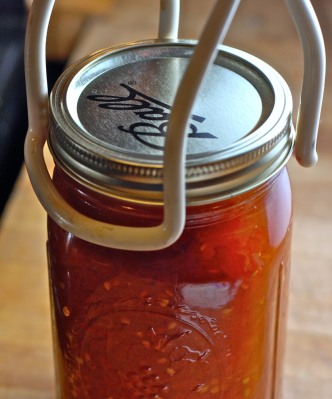 7. Completely submerge jar in boiling water. A canning pot holds several jars at once. If we are only making a few jars we just use any pot that will hold enough water to complete submerge jar. Follow the manufacturer instructions for time. We boiled our jar for 40 minutes. We you take the jar out set it on top of a towel and let it rest. After a few minutes you will here the top pop. The pop means the seal is correct. We always label the top of the jar with the date.
Salute!
Ok, I have one more tomato recipe for you coming soon!!! Couldn’t resist! Stay tuned for a
Goat Cheese and Tomato Tart

One thought on “Tomatoes”