Many years back a friend of a friend came to work for us at Cremaldi’s. Her name was Amanda. She was from Tennessee. She was always saying something to make me laugh. At the time we also had a Chinese woman named Yu working with us in the kitchen. She was in the US with her husband who was studying at Harvard Kennedy School of Government. Between Yu’s poor English and Amanda’s southern accent it was like a TV sitcom in the kitchen. One day I asked Amanda, “has Yu made the Bolognese Sauce?” Amanda turned around and in her thick southern accent said, “hooney I haven’t made anythang.” One day, Amanda brought a box of Carr’s Lemon Ginger Cookies to work. I was hooked! I am a huge fan of Ginger Snaps and Carr’s version with lemon cream is just irresistible. The habit is not cheap! When I saw this recipe for Ginger Sandwich Cookies in Nick Malgieri’s book, The Modern Baker, I had to give it a try. I have to say it’s delicious. The cookies have enough of a ginger bite and resemble the taste and crunch of a store bought Ginger Snap. They stand on their own pretty well (I couldn’t wait until the lemon cream was finished!) The finished product is heaven!

In a bowl wisk together the flour, ginger, cinnamon, and salt.
In the bowl of a standing electric mixer fitted with paddle attachment (or bowl with hand mixer) beat the butter and sugar until fluffy. Beat in egg and molasses. Add dry ingredients and beat at low speed until incorporated. (Don’t forget the salt! I did on my first batch and the cookies were thinner than a piece of salami!) 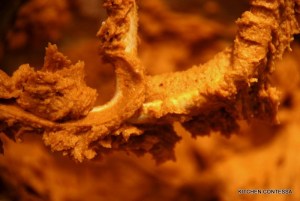 Drop tablespoons of the dough onto a baking sheet lined with parchment paper, 3 inches apart. I used a small ice cream scoop (#00)

Let cool slightly, then transfer the parchment paper to racks and let the cookies cool completely.
Make the filling:
6 tbsp unsalted butter, softened
2 cups confectioners’ sugar
1 1/2 tbsp fresh lemon juice
In the bowl of a standing electric mixer fitted with paddle attachment beat the butter with the confectioners’ sugar until light and fluffy. Beat in the lemon juice.
Arrange cookies in pairs. Spoon or pipe 1 tablespoon of the lemon filling onto half of the cookies. Sandwich with the remaining cookies.

One thought on “Ginger Snaps with a Twist (of lemon!)”